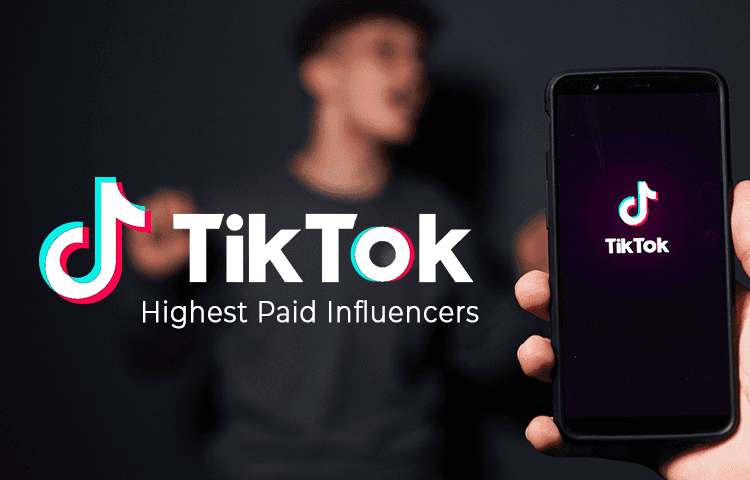 We’re pretty sure everyone at this point knows that popular social media influencers can make a lot of money. Even if you aren’t an existing celebrity, being an influencer can result in you making millions of dollars every year from sponsorships and brand partnerships.

Despite being the newest social media sharing platform out there, TikTok has become a really popular place for influencers to make money. In the article below, we will be talking about a list of TikTok’s highest paid stars, along with a few details about how they got there.

The thing about TikTok is that it is mostly used by generation Z. However, the demographics have shifted slightly since early 2020, and while the platform is still dominated by the younger generation, there has been an interesting increase of millennials, boomers and even Gen Xers.

While these demographics haven’t affected who owns what on TikTok yet, as TikTok continues to grow it’s possible that this could change. For now, let’s take a look at the current list of TikTok’s highest paid stars.

♬ Thanks for using my sound – mind your business ❤️

Addison Rae was a University student that initially just used TikTok to show off her dance moves. She joined the platform in July 2019 and had managed to amass a million followers by October. She started getting recognized at University when walking to class, and even started getting autograph requests from younger teens while at the University’s football games.

She got her first sponsored post in the fall, with Fashion Nova. In December of 2019, Addison left the University that she was at to move to Los Angeles, in the hopes of becoming a full-time celebrity. She got her start in Los Angeles by joining a group of existing TikTok influencers in LA that lived at Hype House, which is a creative cooperative. This resulted in giving her a lot more notoriety, which increased her opportunities to network with big brands.

Her two main revenue streams come from sponsored content and branded merchandise. Fast forward to 2020, and she is the main spokesperson for American Eagle. She currently has 64 million TikTok followers and has earned upwards of $5 million.

Charli D’Amelio started posting to her TikTok account in June 2019. She started to get really famous on TikTok that summer, where a series of her dance moves went viral. Bebe Rexha saw her and invited her to open for the Jonas Brothers in Brooklyn.

D’Amelio moved to Los Angeles as a result and got on Jimmy Fallon. From here, she used TikTok to share her experience as Paris Fashion Week where she went for Prada, and she has even appeared in a Super Bowl commercial.

Charli has since become involved in Hype House as well and has managed to land a brand deal with Hollister. She is worth $4 million and has 92 million TikTok followers.

these outfits are such a vibe. the “made to vibe with charli & dixie” gift guide at @hollisterco is out now, link in bio! ##hcopartner

♬ Do You Feel That? – The Hollister Feel Lab

Dixie is Charli’s older sister, and they have helped each other out to do really well both together and separately on TikTok. They both left their hometown in Connecticut to move to Los Angeles, and a part of one anothers videos all the time.

Dixie has chosen to go the music route and has since released a few singles. She has 40 million TikTok followers and is worth $2.9 million.

Loren Gray didn’t do as well as she would have liked in the beginning, as she signed up with a few average talent managers who didn’t help her cause. However, she decided to break free from them and has since been doing everything on her own. Since then, she has done really well, and in 2018 she signed a deal with Virgin Records and produced eight singles.

She has a huge TikTok presence as you can imagine, and as a result has landed deals with Burger King, Sketchers, and Hyundai. She has 48 million TikTok followers and is worth $2.6 million.

dont bet against Tom Brady is the lesson learned

Josh Richards has worked hard to be one of the biggest TikTok stars, and biggest earners. He is known for his dancing and singing videos, and has since landed a deal with Reebok, as well as having his own merch line. He has a YouTube channel as well where he gets revenue from ads, and he has even gone on to start his own energy drink compay.

Richards is definitely an industry leader and has over 22 million followers on TikTok. He is said to be worth $1.5 million.

The next TikTok influencer on our list is Michael Le, he has started a creator collective. He rents out an LA mansion that houses four other TikTok content creators. He features his 5-year-old brother regularly in his videos and has landed quite a few partnerships thanks to his TikTok following. He also has a relatively big following on YouTube. He has 40 million TikTok followers and is said to be worth $1.2 million.

Spencer X is known on TikTok for his beatboxing and got his start on the platform in February 2019. He briefly attended university before dropping out to spend his early 20s performing in a number of different musical acts.

Spencer X moved to LA in 2019 and soon landed big brand deals with Sony and Oreo. He is currently working on more of his singles which he hopes to release soon. He has 45 million TikTok followers and is said to be worth $1.2 million.

4 years ago I was pitched a crazy idea by @kipper.doodles 💡

Zach King has been a mainstay of the internet for years now. Back in 2008, he had a YouTube that ended up doing really well, and he was popular on Vine when Vine was a thing. These days, he continues to do really well on TikTok, with clever videos that he edits and chops that has helped him amass more than 50 million followers. He is definitely one of the highest paid stars and is said to earn as much as $41,000 per post.

The next TikToker on our list is an Indian influencer, and he is also known for his fashion blog and acting skills. He got his start in 2017 when he posted videos to Instagram, but he’s best known for his duet videos over on TikTok. He has 43 million followers and is said to earn $35,000 per post.

it’s the ✨jitters✨ at the end for me

Baby Ariel has actually been on TikTok before it was even TikTok. She started posting videos on Musicl.ly, but now she acts and is a musical artist. He has a long list of things that she has achieved and was even featured on the cover of Billboard magazine. She has been recognized by Time magazine as one of the most influential people on the internet. She has 34 million TikTok followers, and she is said to earn $32,000 per post.

wait for it😉🤣 the transition tho🤩

Gil Croes is an actor and model from Aruba that is known for his comedy skits on YouTube and TikTok. He has a YouTube channel with his brother, and he went to college and even worked as a model for a little while before getting his breakthrough TikTok and YouTube. He currently has 29 million TikTok followers and can earn upwards of $26,000 per post.

The next TikTok star and top earner is Arishfar Khan, an Indian actor who is also a social media influencer. She got her breakthrough TikTok by posting fashion and dancing videos, as well as lip-syncing videos. She is now one of the most well-known TikTok influencers and one of the most followed celebrities in India. She has 28 million TikTok followers and earns $24,000 per post.

Kristen Hancher is a popular TikToker that has millions of followers on Instagram and YouTube as well. She is a Canadian actor and social media influencer who is well known for dance and music videos on TikTok. She got her start live streaming on You Now, before moving over to TikTok. She has 24 million followers on TikTok and can earn upwards of $24,000 per post.

Awes is a dancer and social media influencer who is based in India. He became incredibly well known almost as soon as he started on TikTok and has been posting dancing videos on TikTok for a long time now. He has 25 million TikTok followers and earns $23,000 per post.

Last but not least on our list of TikTok’s highest paid stars is Nisha Guragain. She is an Indian social media influencer, and she is best known for her fashion and lip-syncing videos. She is one of the most well-known TikTok stars in India and has appeared in a number of different music videos. She has 28 million TikTok followers and can earn $23,000 per post.

So, there you have it – a list of TikTok’s highest earners right now. As you can see, they are from all over the world, and while they maintain their coveted spot on the list for now, there are always new TikTok artists emerging who are hoping to knock them off.

What’s clear at this point is that TikTok influencers can make a decent income from posting to their TikTok profile. If you want to become the next TikTok influencer, make sure to put the work in, and keep ahead of the trends. Good luck!