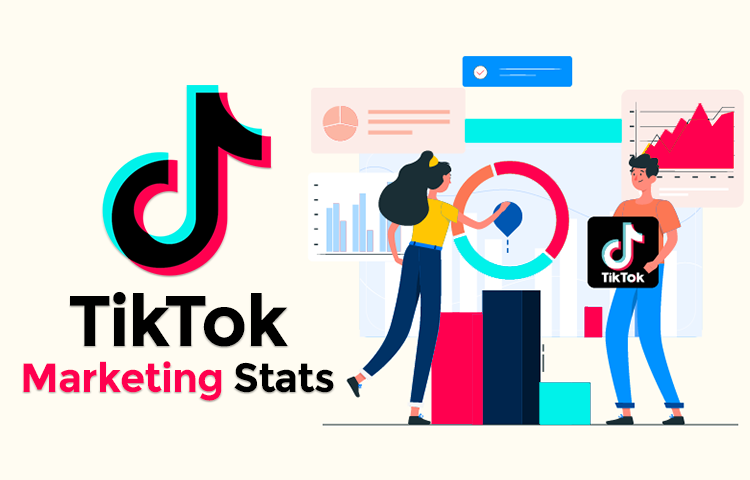 TikTok has experienced a meteoric rise in the past couple of years.

While it might have its headquarters in China, it’s proven to be hugely popular with the Western market, with the states, being one of its biggest demographics. The platform has changed a lot over the last few years, especially since it used to be known as Musical.ly.

What’s pretty interesting about TikTok is that it’s not that forthcoming about statistics around its rise, or about its parent company, Bytedance.

However, with such a crowded industry, it’s not hard to crunch the numbers and figure out what’s going on.

Let’s take a look at some TikTok statistics that we think are really going to surprise you.

TikTok Users Spend Almost 500 Minutes a Month on the App

Statista has said that US TikTok users spend as much as 500 minutes per month on the app. This is only second behind Facebook.

In a Statista survey in 2019, 23 percent of people said that they had seen a TikTok video, or used the app. This number has only gotten bigger as more people have been forced inside due to COVID.

This is pretty impressive considering only a couple of years ago nobody had even heard of TikTok. In, fact, its meteoric rise is almost unprecedented, and it’s difficult to imagine that another app is going to come out and eclipse these kinds of stats anytime soon.

Entertainment is the Biggest Category

According to hashtag views, the biggest category on TikTok is entertainment. We are assuming that this category includes all of those lip-syncing videos that first propelled TikTok into stardom. In second place are pranks, and in third is sports and fitness.

This stat comes as no surprise considering the vast majority of people who use TikTok fall into generation Z or are millennials. While there are brands on there trying to expand their audience and make it possible to connect with the younger market, at the end of the day the biggest reason that people are using TikTok is to be entertained.

2nd Most Popular Free Apps Download for all Devices

In 2019, TikTok was the second most popular free app download, period. The first? WhatsApp.

We all know that WhatsApp is owned by Facebook, so this stat shouldn’t surprise you – but we are pretty impressed to see that TikTok had surpassed the Facebook app itself, as well as the Facebook messenger app. Again, this goes to show that the app has made a huge name for itself, and will continue to do so in the future.

TikTok is currently available in more than 141 countries, and counting.

This is helpful to know if you are a brand that is trying to get in front of your target audience on TikTok. The more you know about where your audience is located in the world, the better.

This means that you can optimize your TikTok content strategy to find those people and put your content in front of them, so they are more likely to engage.

TikTok has a higher number of engagements per post when compared with other popular social networks.

There are an impressive 199 million people in India who currently use TikTok.

There has been a little bit of controversy over TikTok being in India, as it has been banned completely from the country in the past. However, things look like they are on the mend, and it seems as if people have wasted on time in getting back on the app and making the most of it. We expect to see this number grow in the coming years, too.

Yes, TikTok is popular in America, but it’s also popular in Asian countries, where it has seen the most growth.

While these are mostly on the Douyin version of TikTok, 400 million from one country is still an impressive amount.

This stat is no surprise, considering TikTok originated in China. This means that if you have people within your target market that is located in China, then there is a good chance that you are going to be able to connect with them if you focus on optimizing your TikTok content.

800 Million Users Around the World

An unbelievable 800 million people around the world currently use TikTok.

Most Downloaded App on Google Play

Up to $1B Purchase Price

While nobody has ever publicly admitted how much TikTok is worth, and how much Bytedance paid to take over Musical.ly, it is estimated to be in the region of 1 billion.

TikTok is truly an international app, hosting more than 39 languages on its platform.

Again, this stat is helpful if you are trying to figure out who you need to be targeting. You might be focused on America right now and English-speaking members of your demographic, but you might also have people in Europe and Asia that are interested in your brand and want to connect with you. The good news is that because TikTok is available in so many languages, you can.

Took 200 Days to Get Off the Ground

It took TikTok developers 200 days to create the original version of TikTok and Douyin.

We think that this stat shows stamina and a willingness to go at breakneck speed.

In the first year of being an app alone, TikTok received 1 million video views a day.

Loren Gray, a popular American social media personality and singer now has TikTok’s most followed account outside of China, with an eyewatering 40 million followers.

Currently, Dilmurat holds the Douyin record for the most fans, with more than 50 million.

TikTok might seem like a relatively new phenomenon, but its predecessor, Musical.ly, first got its start all the way back in 2014.

It’s hard to believe that TikTok has been around for four years now, but it has been. Douyin was officially launched in 2016, and TikTok in 2017.

TikTok has been installed in almost 2 billion devices since its inception, or 1.9 billion to be exact.

TikTok’s revenue has risen sharply as it has gotten more popular. Currently, it is slated to bring in a whopping $3.5 million every month.

20% of Profit from the States

20% of TikTok’s revenue comes from America. China brings in 69%.

90% of TikTok Apps on Android

More than 90% of TikTok downloads have been on Android devices. The only exception to this is in the states, where there are more iOS users.

Majority of TikTok Users Use it More Than Once a Day

In fact, the official numbers are nine out of ten users. This means that users are loyal and keep returning to the app.

TikTok has been ranked on SimilarWeb as number six in India for being a free video player.

There have been 46 million installs of the popular social media sharing app in 2019.

There are many ways to calculate engagement rate, but one way indicates that TikTok users get 52.1% engagement on their content. Of course, this rate varies greatly on the size of your following.

Most American Users Between 18-24

25.8% of American users fall within the age bracket of 18 to 24, which means that the majority of TikTok users in general are young.

As well as creating their own content, 68% of TikTok users watch other people’s videos.

More than 63% of TikTok users like other people’s videos.

More Than 60% Follower Someone Regularly

63% of TikTok users have followed someone new in the last month.

More Than 50% Uploaded a Video Recently

55% of TikTok users uploaded a video to their feed in the last month.

More Than 50% Commented on a Video

54% commented on a video that wasn’t theirs in the last month.

More Than 40% Uploaded a Duet Video

43% of TikTok users created a duet video with someone else in their community recently.

TikTok as a website reached 1 million views in early 2019.

TikTok is ranked 421 on Alexa’s ranking website. This means that it is the 421th viewed website around the world.

More Than 500 Million Views for #thinblueline

In February 2020, TikTok received more than 113 million downloads for the month.

Almost 50% of teenagers have used TikTok

49% of teenagers around the world have used TikTok, with only 9% claiming to be from America.

Bytedance is currently valued at $78 billion.

15 million new users, to be exact. When India decided to ban the app, TikTok lost 15 million new subscribers. The ban didn’t last long, but the setback was felt for longer.

More than 37% of American TikTok users say that they live in a household that makes more than $100,000. However, it is also popular with lower-income families.

TikTok is used by 2 million more females than males in America.

Use is More Balanced in Japan

Both genders use TikTok relatively equally in Japan, especially when compared with the United States.

The majority of Indian TikTok users are male.

TikTok Users Are Getting Older with the App

TikTok is really popular with teens, but these teens are aging with the app. They aren’t losing interest in it – they are growing with it, which is interesting.

Families on the Chinese version, Douyin are 460,000 strong and show things from everyday life to the births of their children, and weddings.

The most popular type of dog to be featured on Douyin in 2019 was the husky.

So, there you have it – a long list of fascinating TikTok statistics and facts that you probably didn’t know about. How often do you use TikTok, and what kind of videos do you like to upload?